Changes and History of Newfoundland and Labrador Area Codes:

Suspended
The Canadian Radio-television and Telecommunications Commission (CRTC) has approved area code 879 as a distributed overlay of area code 709, however, the implementation date has been delayed indefinitely. 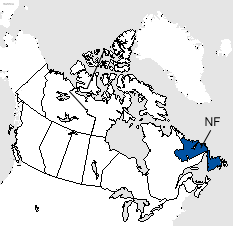 Select Any Newfoundland and Labrador City or Town Alphabetically

Area Codes By Province or Territory